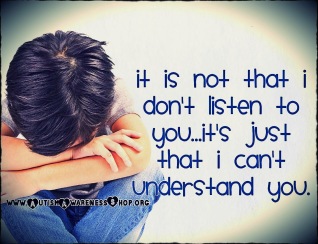 I know that eye contact is not everything.  But when Sydney stopped making eye contact with us, it made me very sad.  When she did look at me, she was really looking through me.  Some therapists would tell me not to force her to make eye contact.  They said that it was too hard for her to do.   I didn’t accept that.

There were times when I would get down on the floor to be on her level.  I knew that she could hear me and early on I am not sure if she did understand me.  But over time I could see that she was understanding my questions. The problem was that I wasn’t giving her enough time to to process and respond.  When she was younger she used her PECS pictures to communicate by handing me a picture of her response.  From there she progressed to using the picture and attempting to say the word.

This process of teaching her to communicate took years.  With the hustle and bustle of working and home sometimes I wouldn’t allow Sydney enough time to answer.  See I was in such a rush to get out of the door, I would answer for her.  Giving Sydney the time to process and respond would mean that I would be stuck on Lahser Road in traffic trying to drop Harrison off at school.  And that would throw off our entire morning.

Many days and nights I would watch Sydney play.  There would be times when she would walk up to me and look me directly in my eyes.  It was moments like this that I cherished.  For an instant I had her attention, we connected.  Sometimes she would hug me, say Mommy or give me a toy.  Other times are eyes would meet and I would cry.  I wanted desperately to know what she was thinking, what she wanted to tell me, and if she was in pain.

In Sydney’s mind there is so much going on. I wish I knew what she was thinking and why she had to do things a certain way. I don’t want her to change I just want to know what it all means.  The epilepsy doesn’t help her.  I think it makes her brain more confused at times. She is processing sights, sounds, smells, and language.  Plus she feels the onset of her seizures. I can’t imagine how scary that is for her.  Let’s not even mention the hormonal changes.