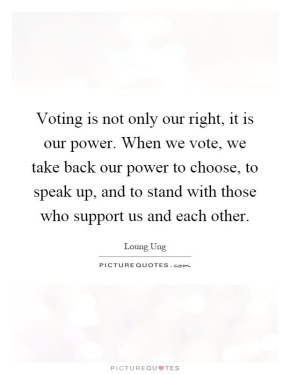 One of my readers messaged me and asked why she should even take the time to vote in November.  At first I was shocked by the question.  But realized many people may feel the same way.  Here’s my quick response for her and for anyone else that questions voting in this year’s presidential election.

First, everyone should exercise their right to vote.  Voting should not be taken lightly.  As a black woman I must vote.   Over the weekend I watched Selma twice and did my research. Four constitutional amendments had to be passed before I could vote, the 14th, 15th, 19th and the 24th amendments. People died fighting for the right to vote. People were still denied this right, even when the voting rights for blacks was passed.  Why vote?  I have to believe that the sacrifices that were made by the generations before me is the reason that I will vote. Go vote!

Next, when I think about the importance of  voting I think about my children.  I take my children with me when I vote. I want them to see the importance of voting and not to take that privilege for granted. I want my children to know that it is okay to not agree with others and their political views. But they should always respect a person’s opinions. I remember voting for the first time in an election.  While voting, I had a flashback of watching my parents vote and wishing they would let me use the pen and punch the holes in the paper.  I had no clue really what they were doing until I was older. I just wanted the sticker anyway.

Finally, all of our voices matter.  We love the country we live in. Come together and let your vote count and your voice be heard.

~See you at the polls!