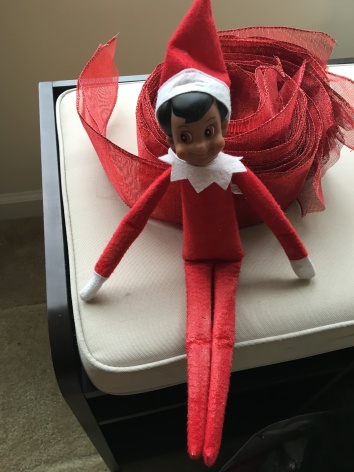 I admit I caught the Elf of the Shelf fever when we lived in Michigan.  Our elf is Wilbur.    The story is cute and the kids enjoyed listening to it.  The first few day with Wilbur were fun. He toilet papered the tree, made a snow angel in flour, built lego towers, and  hung in the stocking.  I was on elf duty with an alarm set to move the Elf. Sometimes Syd would move the elf for me and Harrison would have a panic attack.

Harrison and Sydney would look for Wilbur as soon as they got up and if he didn’t move I would just tell them he overslept.  One day I was so desperate I just threw him down the stairs and told the kids he was skiing.

Why was I doing the Elf?  Didn’t I have enough going on in my life? I didn’t have time to keep moving that Elf.  It wasn’t even December yet and I was running out of ideas. But it was something that made the kids excited, it was the least I could do.

Harrison would tell me elf stories from his friends. The elves were writing notes, hang gliding, and baking cookies.  One day the kids asked for Wilbur and I told him that he missed home and he was in the freezer.  Sure enough they had to look at Wilbur in the freezer, smiling that creepy smile next to the chicken and the ribeye.

It is a wonderful concept. I must say hats off to the second grade parents at my school.  When I do lunch duty, I love hearing the stories about what you have done for the elf at your house.  You all get parent of the year award in my book.  My kids caught me on a bad day last year and I had to tell them “Sorry kids Wilbur is dead.” I know worst mommy moment.  I felt guilty, not really. I felt at peace.

Harrison was already questioning Santa so it was time to break the news about Wilbur too.  I would forget to write the goodbye letter from Wilbur and leave Wilbur on the mantle until New Years Day.  That elf was too much responsibility for me. This year the kids helped me unpack the decorations to put up the tree.  Well, we came upon good old Wilbur and Sydney yelled, “I see dead people!”.

We will still watch Polar Express, bake our Jesus birthday cake and get new pajamas for Christmas Eve. But no more Elf. Sydney still believes in Santa. We will see how long that lasts.