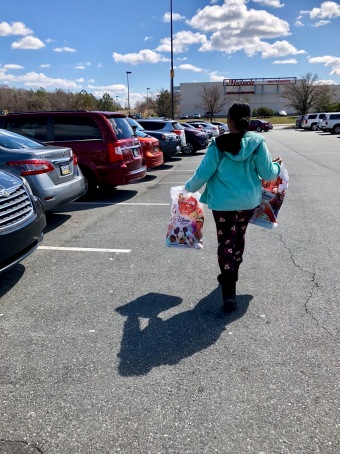 It was March 16, 2018. We are almost finished with our third appointment at AI Hospital. It really stinks that this is how we had to spend part of our day off from school. But that’s autism.

We received a great report from the last doctor. He even commented on how Sydney was attentive during the appointment and answered his questions without my prompting.

The good news was that we could begin to wean Sydney off one of her medications. Instead of returning in three months. We were cleared to return in six months. That was huge! We had to have a quick dance party in the office before we left to celebrate.

Sydney did a great job. Harrison decided to stay home this trip. I don’t blame him. Someone should be enjoying sleeping in on a day off from school. He deserves it.

As we were leaving the hospital. I had this brilliant idea. We should stop at the mall on the way home. In Copher’s Community, we don’t do the mall. We do online shopping and Amazon.

I was feeling adventurous, possible cray cray and sleep deprived. I didn’t mention anything to Sydney. Just in case I changed my mind on the drive home.

We were approaching the mall. You can’t miss it from Route 1. When I took the exit for the mall. Sydney’s face was beaming, as I watched her from the rear view mirror. What thirteen year old teenager wouldn’t love a trip to the mall?

Thank God we found a parking  spot. We were only going in one store, The Disney Store. Sydney still had her gift card that her father gave her at Christmas.

Sydney was excited to get inside of the mall. She quickly remembered where The Disney Store was and went ahead of me. It was nice to see some friendly faces. We bumped into one of Syd’s former teachers. I think that was the push I needed to shop and not run for the doors to leave.

When Sydney entered the store. She greeted the workers. They knew Sydney from four years go when she opened The Disney Store. Sydney was such a different kid back then. Our dear friend Michele wasn’t working but the other workers took great care of us.

I gave Sydney room to shop. I reminded her how much money she had to spend. She has been collecting Animator Plush Dolls. So she was excited to see the selection.

My goal was for her to not get all toys. I showed her the beach towels and t-shirts. She immediately found two shirts that she liked. It was great because they were buy one get one 50% off. I taught her well.

She didn’t pay attention to the sizes. I think she is use to online shopping when you just select your size. This was different. I helped her find her size and she was fine. 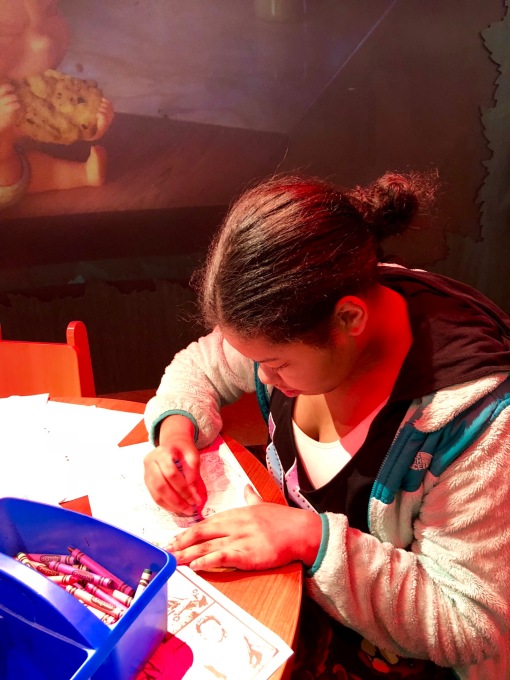 The store wasn’t crowded. Syd went to the table to color and watch the movie clips. In the past I would have cringed when other children came over to Syd. But she smiled, said hello and shared the crayons.

I searched the clearance rack for a shirt for Harrison. While glancing back at Sydney. She was doing great. I would have never done this before. I would have been hovering off her like a helicopter.
For a quick moment, I noticed that Syd began to color very hard on the paper. That was my cue that sensory overload was kicking up. Time to roll out. I gave her a three-minute warning. She did great cleaning up and waiting in line to pay.

Our trip to the mall was great. We felt normal. When we were leaving she said “Let’s build a bear and Justice.” Slow down baby girl. Let’s save that for trip number two. The mall was getting crowded and we weren’t pushing our luck.

Sydney has never done a Build a Bear. Yes, she’s 13 but maybe our next trip could include Build a Bear and a trip to Claires. We found another gift card from her father we need to spend.

Sorry if my blog bored you. If you have been following our autism journey. Then you know I stepped out of my comfort zone. I didn’t have any backup. I had Jesus!!!!

At the end of the day we all smiled at the victories we accomplished on March 16, 2018.

2 thoughts on “Adventures in Autism”